“Once upon a time Pokhara was a mellow, sleepy town. Lakeside then was called ‘Baidam’. It was the only place in Nepal where even buffaloes speak English’, according to locals. Continental breakfast with fresh coffee and (magic) mushroom omelets was served in small, tattered huts. Now life around lakeside has transformed so much that it is rare to see a buffalo lazing about. The name ‘Baidam’ has been long forgotten.”

Bikalpa Art Center is pleased to present the 2nd solo exhibition of Mr. Prabod Shrestha. The exhibition will feature 21 pieces of screen printworks with a juxtaposition of his poetry. Mr. Shrestha’s work shows the reflection of minimalism, meditativeness and intuition. The source of inspiration is the characteristic of Lakeside Pokhara (Baidam) and the deep connection with nature and simplicity around.

[divider][/divider] About the Artist
Prabod Shrestha was born in 1966 in Baglung and moved to his ‘mamaghar’, Kathmandu, at the age of two. Since his father was a civil servant, Prabod moved countless times and lived in different parts of the country. In 1975 his family moved back to Kathmandu, and he has lived here since.

During the hippie days (the 70s- 80s) he frequented Freak Street Kathmandu and Lakeside Pokhara (Baidam) with friends, played guitar in a band called Cream Roll, and traveled to India, South East Asia and different parts of Nepal.

He worked at Lincoln School as a teacher assistant and later got trained as a video editor. Prabod worked as a freelancer with different advertising agencies and film producers creating award-winning (motion) graphics and designs. He was involved in establishing youth magazine Youth Vox. He also ran a restaurant at Pokhara’s lakeside area during 2008- 2011

In 2013, Prabod opened Ishine Gallery in Kupondole, showcasing the work of Nepali artist Jimmy Thapa, novel crafts and his own copper jewelry designs. In 2015, he lost his gallery during the earthquake and started the photographic and graphic career again. he had the 1st solo exhibition ‘Kathmandu my Fascination’ at Bikalpa Art Center In 2018, with the collection of images he took while walking and wandering in the street of kathmandu.
[divider][/divider] Event Details:
3:00 pm – Opening reception with wine/ tea and light snacks
5:00 pm – Poetry Recitation
6:00 pm – Drinks and Dinner (on purchase) with Acoustic Musical Session 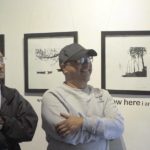 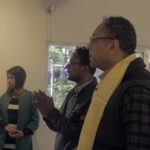 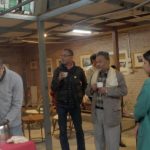